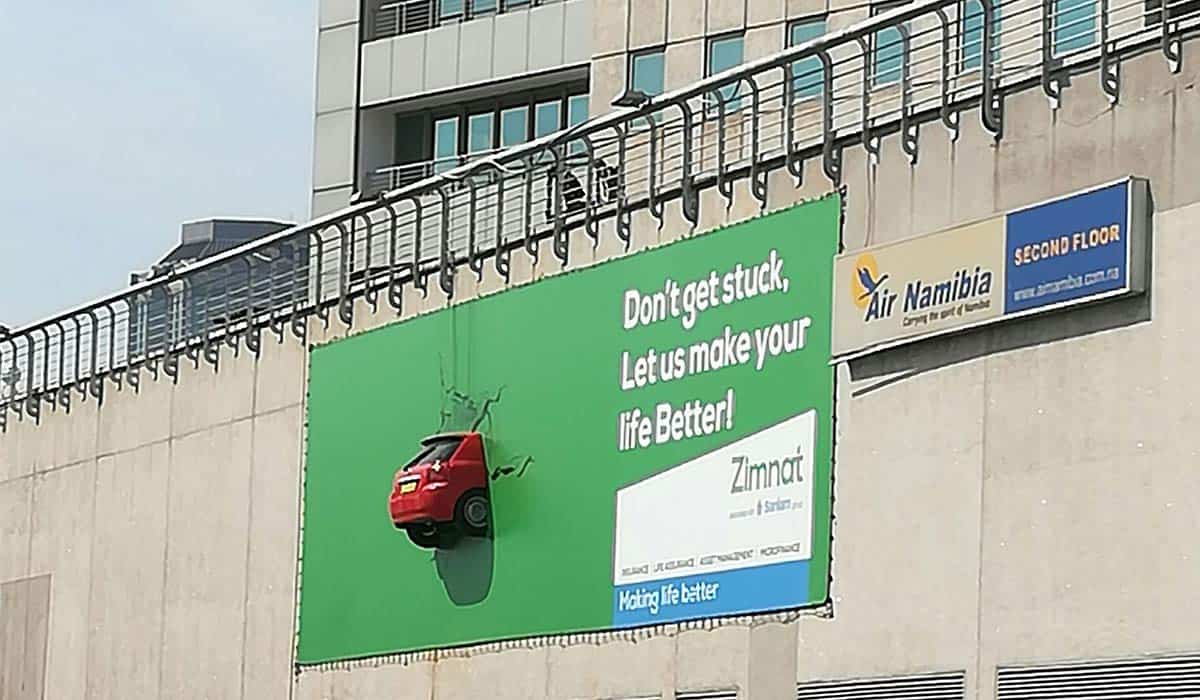 Zimnat has launched an innovative advertising campaign to let people know some of the ways in which it can make their life better, through the customer friendly insurance and finance services it offers.

Billboards have now been added to the campaign, which has already been promoted through television and the print media. The emphasis is on how Zimnat “makes life better” in different ways. Journalists were taken today to see some of them in Harare.

Some executions speak to the ease and speed with which insurance claims are lodged and processed as well as how Zimnat can help one recover should an unfortunate event befall one.

However, there is also a corporate social responsibility element to one of its billboards along Borrowdale Road, which shows the chalk outline of a body and, using texting shorthand, carries the warning message “pll ovr, dnt txt n drv”.

The other billboards use similarly dramatic executions. Two of the billboards, one by Coke Corner and another on Robert Mugabe Road, have a large head and shoulders image emerging from the billboard of a man who looks frustrated and as if he is about to blow his top. The billboard message reads: “We pay claims quickly to save you the stress.” This billboard is certain to grab the attention of those who pass by it.

Another billboard, at the intersection of Lomagundi Road and Sam Nujoma Street, shows a man who looks worried and seems to be pulling out the billboard in frustration over the claim forms he has to fill in. The corner of the billboard has been physically pulled off. The message reads: “Is this what your claims process looks like? Rather insure with us.”

Perhaps the most dramatic is a billboard on Julius Nyerere Way at Joina City, which has an actual car incorporated in it. “Don’t get stuck. Let us make your life better,” the billboard reads.

The company offers businesses and individuals a variety of products to give them peace of mind. These include motor insurance, home insurance, life assurance, travel insurance, funeral cover, health and accident insurance, pension schemes, unit trusts and private wealth management.

“Our aim is to make life better for others. This advertising campaign is intended to increase awareness of the many ways in which we can do this,” commented Zimnat Group Marketing Executive Angela Mpala.