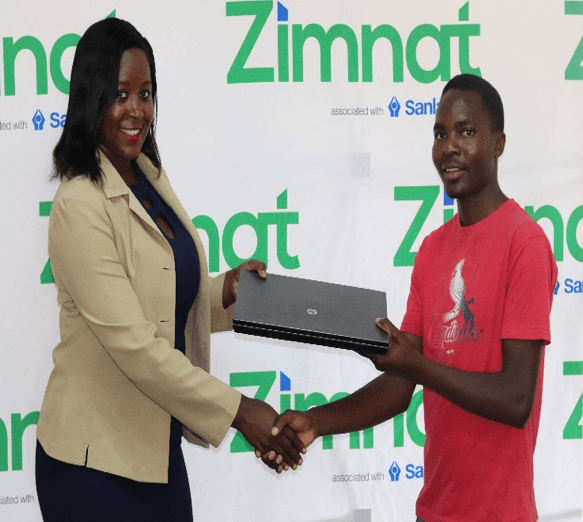 Zimnat recently lived out its purpose of making life better by setting Providence Pangira on a path of realising his lifelong dream of one day becoming a doctor. Providence who achieved brilliant results at Ordinary and Advanced Level despite his deprived background lacked the funds to go to university and was in August awarded a scholarship by Zimnat.

Prior to this Providence’s life had been one of strife. He enrolled for Form One at Dangamvura High School in Mutare, his family was living in a single rented room in Mutare’s Chikanga suburb and there was no regular family income. Providence therefore took odd jobs to raise the money for his schooling.

Despite having to work as well as study in far from ideal conditions, Providence achieved seven As and four Bs at Ordinary Level. At Advanced Level he obtained an A in Biology and Bs in Pure Mathematics and Chemistry.

However, with no money to proceed to university it looked as if his ambition of becoming a doctor was unattainable. He ended up taking up a full-time gardening job in Harare. The young man’s plight was highlighted earlier in the year on social media and in a weekly publication.

Commenting on the scholarship award Zimnat Group Chief executive officer Mustafa Sachak said “As Zimnat our commitment is to making life better for everyone and we hope that those we can assist will be able to realise their full potential. We were impressed by the sheer resilience that Providence demonstrated and thought we should play our part in helping make his dreams come true.

The scholarship offered to Providence includes a commitment from us to paying his university fees and a stipend, as well as the provision of a refurbished laptop to help him with his studies.

Another well-wisher who was also moved by Providence’s story, paid for his initial tuition fees. As Zimnat we will, therefore, cover all other expenses for his first semester, including his accommodation and an allowance, as well as providing him with the laptop. We will pay the tuition fees for future semesters”, said Mr Sachak.

Zimnat, which is a diversified financial group associated with the Sanlam Group, the largest non-banking financial services group in Africa, has managed to continue to remain true to its declared purpose of making life better for others, despite the tough economic conditions, which has made survival the primary focus of most businesses.

As a community driven organisation, Zimnat has assisted several institutions over the past few months, including schools in Chimanimani affected by Cyclone Idai. The business also recently handed over an ablution block for girls at Chizungu Primary School in Epworth to replace the pit toilets that they were previously using.